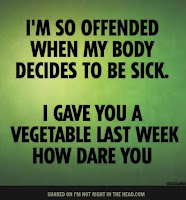 
Day 1
Today is the day for all the imps of hell to have their annual summer picnic and field day. I know this because it is being held in my stomach. They are a rowdy bunch. And they're causing me much discomfort and copious amounts of projectile diarrhea. Okay you didn't need to know that last part.


Day 2
Breaking news. Update on Melvin diarrhea situation. I have my pillow and my blanket with me on the toilet. That should be some indication of how my day is going. I know this may seem unimportant to you right now. But trust me, one day you will tell your kids yes, I was there.

Day4
I'm very glad I conducted the experiment on how long I can sit on the toilet without becoming paralyzed. As you may recall the maximum interval was 17.5 minutes. With this data to work with I have imposed a 15 minute limit on thunder squat sessions. I have thus avoided the crippling paralysis associated with excessive shitter exposure. "Science for the good of mankind". Can you say Nobel Prize anyone?


Day 6
I'm going to need the services of a good family therapist. Me and my butt are very angry at each other right now. It is threatening to leave me. There's just no joy left in our relationship. It's actually claiming physical abuse. Can you imagine that? "Hey asshole it's no picnic for me either!"
Oh I'm sorry. These are just very trying times.

Day 7
Update on Melvin's guts. I only weigh 4 pounds now. Part of that of course is hair and beard. I don't even bother to refer to it as diarrhea anymore. It's going down in history as the Great Splatter Ankle Event of 2017. I doubt I'll get out of the chair before noon. Which is actually normal for a Monday. And I doubt I'll be able to do any work either. Also normal for Monday (and Tuesday) . After working around the clock for several days now the national Center for Disease Control have identified a heretofore undiscovered organism that seems to be the cause. They're going to honor me by naming this new ailment after me. Which is great. So from now on anyone who gets the shits for more than 3 days will be considered to have a case of "The Melvins". I was hoping that the first disease named after me would be venereal in nature. But that's looking less and less likely with each passing year.


Well it's midnight and after another full day of sphincter aerobics I find myself still alive and kicking. Surprising actually because I'm pretty sure I blew out my liver a couple hours ago. I always heard you couldn't live without one so I'm finding that rather confusing. The hallucinations are entertaining though. Most involve me saying inappropriate things and getting dirty looks from people. Pretty much like real life. Okay, you all know how I hate to be crude, so I will put this as delicately as I can. Have any of you ever heard of anybody turning completely inside out? I'm beginning to wonder. That can't really happen can it? Can it?!

Days 9 through 11
Just a hallucinatory blur.


Epilogue
I did not die. I am mentally and physically scarred for life, but not dead. My asshole is dragging out about three feet behind me now. I suppose I'll have to have that looked at. My crapping muscles are really toned so I now have an odd looking "two pack". I will have to have my toilet checked for cracks and likely replaced. Only time will tell about the rest of the plumbing. I got a nice letter from the Angel Soft toilet paper people thanking me for my service.

There were lessons learned, so there is that. Among the lessons are these: Green meat is NOT a vegetable. Potato salad does NOT move on its own. Being in the refrigerator does NOT make everything "fair game".  I didn't learn much about life or mortality though. Probably because I have always been full of shit and will quite likely die full of shit too.

Go ahead. Say it. I dont care.